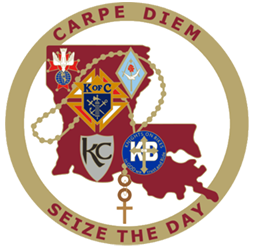 Thanks to the efforts of Father Michael J. McGivney, assistant pastor of St. Mary’s Church in New Haven and some of his parishioners, the Connecticut state legislature on March 29, 1882, officially chartered the Knights of Columbus as a fraternal benefit society. The Order is still true to its founding principles of charity, unity and fraternity.

The history of the Order shows how the foresight of Father Michael J. McGivney, whose cause for sainthood is being investigated by the Vatican, brought about what has become the world's foremost Catholic fraternal benefit society. The Order has helped families obtain economic security and stability through its life insurance, annuity and long-term care programs, and has contributed time and energy worldwide to service in communities.

The Knights of Columbus has grown from several members in one council to more than 14,000 councils and 1.8 million members throughout the United States, Canada, the Philippines, Mexico, Poland, the Dominican Republic, Puerto Rico, Panama, the Bahamas, the Virgin Islands, Cuba, Guatemala, Guam and Saipan.

The great growing cavalcade of Catholic knights really entered the South when Nashville Council No. 544 was set up in 1901. This group in a sense became one of the forebears of the Knights in Louisiana, including the Fourth Degree. Chattanooga No. 610, Memphis No. 616 and St. Augustine, Florida, followed that year.

Clergy and Catholic laymen in Louisiana were beginning to hear more and more about the influential fraternal order which was spreading so widely even through the South, from notes in the Morning Star, in the Catholic magazines and in papers from New York, Cincinnati and St. Louis which circulated in the state, in "Southern Intelligence" columns of newspapers, and through word of mouth information brought back by visitors to other parts of Dixie. Two prominent Catholics in New Orleans had heard of the new fraternal organization, and so glowing were the accounts of it that they decided to enroll. One was Rev. Thomas F. Delaney, former administrator of St. Theresa' Church of New Orleans, who became chaplain of the Sisters of St. Joseph; the other was Captain John P. Boyle, officer in the New Orleans Police Department for many years, and one of the Catholic lay leaders.

Word had been received that the newly established Mobile Council No. 666 was to have an initiation, and both arranged to attend. Their applications were presented and approved, and Father Tom (as he was popularly known) and Captain Boyle went to Mobile, where they received the three degrees of the Knights of Columbus. There they met Eugene A. Donnelly, a travelling salesman from New Orleans, who was initiated at the same time. All three were tremendously impressed.

While returning to New Orleans on the Louisville & Nashville train, Father Delaney and Captain Boyle decided that by all means the order must be introduced into Louisiana. This was the answer, Father Delaney felt, to the question of activating Catholic laymen and arousing them to greater fidelity to the Church and their religious duties. In the order, Captain Boyle saw the opportunity to band Catholic laymen for joint activities, good example and taking part in Catholic projects, besides manifestation of their loyal Americanism. In addition, here would be provided an organized Catholic laymen's group for civic services in time of need.

The first memorable, historic initiation in Louisiana took place on Sunday, November 23, 1902, in the old Tulane or Gibson Hall. The Nashville degree team arrived the preceding evening and members were quartered at the Monteleone Hotel. Delegations came also from Memphis Council 616 and from the Mobile Council, and from various parts of Alabama, principally Birmingham. All the tedious preparations of the hall were made by Captain Boyle. Mass was attended by the delegations and candidates at the Church of the Immaculate Conception, then the entire group marched to the hall - the first Columbian procession in the order's annals in Louisiana.

The initiation was a memorable one, and aroused tremendous enthusiasm. The Memphis Council officers conferred the First Degree, the Birmingham Council the Second Degree, and the Nashville Team the Third Degree. The ceremonies were under the direction of Tennessee Territorial Deputy Ferdinand E. Kuhn. That evening a grand banquet was given at the St. Charles Hotel, characterized as "something out of this world."